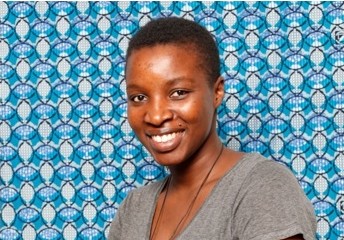 „Naming what was once Unnameable“

Experiences of being made “other” are part of growing up in the Diaspora, especially when there is a somewhat silent understanding of who is thought of as part of the nation and who is not. In the Austrian context people of color are not thought of as part of the nation: we are other and are identified as such on a daily basis. Questions as “Where do you come from and when will you go back?” illustrate this line of thought perfectly.
When I talked with people of color about their childhood I realised that already at a very young age children of color have a specific sense for the processes of being made “other”, even if they are often not able to name what is happening exactly. While making interviews with and photographs of women of color who grew up in the German speaking Diaspora this project encourages a process, in which the trauma of being made „other“ in childhood is talked about from today’s self-conscious and self-determined perspective: what was once unnameable becomes nameable. Naming what was once Unnameable © Belinda Kazeem

BELINDA KAZEEM (Austria) studied International Development at the University of Vienna. Cultural theorist, writer, and artist. Part of the Research Group for Black Austrian History and Presence that was founded during the exhibition project „Remapping Mozart. Hidden Histories“. Co-editor of the book „Das Unbehagen im Museum. Postkoloniale Museologie“ /“The Uncanny in the Museum. Postcolonial Museology“. Works with an interdisciplinary approach that is deeply based in postcolonial and Black feminist theory, trying to combine theory with a visual/textual practice that enables her to create self-determined representations of bodies that are usually marked as “other”.